This is not trivial

In the days since the "election," I have been continually amazed that a handful of heretofore relatively trustworthy (or so I thought) figures (e.g., on the left Judy Woodruff, on the right Bret Baier) have so quickly waved away all talk of elekshun phr0d as "baseless." [You will no doubt be able to work out why the intentional misspelling is necessary, since a proper spelling would only hasten the day when some unseen hand—not God's—is bound to intervene.] Time and again I have asked: At what point did the media cut all ties between itself and the imperative to investigate anything? And truth be told, not even a vast conspiracy of big tech, social media, mainstream media, the Democrat party, establishment Republicans, all the many agencies of the intelligence community, and all their partners around the world can manage to keep this cat in this bag. There is too much cat, not enough bag, and what bag there is is already shredded because the cat is really pissed.

As narratives go, the author behind all these is really fourth rate at best. Who is wielding this pen, anyway? Surely not Mr. Rhodes. No, it is truly a den of thieves and liars that cannot get their story straight, but I rather suspect the main figure is one who is notable for the difficulty he has finishing his own books.

As for the press, all these former "journalists" do is parrot the "narrative" garbage that is fed to them. The only conclusion I can come to is that they are completely bought and paid for, and therefore not a "free press" and by extension not really entitled to the constitutional projections thereof, or else they are just plain lazy, willfully blind, and cannot be bothered. Either way, I have found they are no longer worthy of the time and attention of this member of their former audience.

Here, by the way, is just one of many, many, many (!) aggregator sites that is tracking the evidence.

And if you have not read the three (!) Navarro reports, you should.

As for the latest "impeachment," it is amply clear enough to me — from a lifetime of observing (in art, literature, film, human nature, etc.) how the bigger a lie gets the wilder and more ridiculous are the tantrums designed to distract from it — that this is just one massive head-fake freak-out to draw attention away from the above. Indeed, I think it is in the running for the biggest lie ever told, so the freak-out in response to the searchlights hovering overhead to expose it is going to be of epic, yes, even biblical, proportions.

And they should also recognize that "abusive relationships" can include social and political relationships, even relationships between political parties. I have seen many, many, many (!) comparisons in recent years that liken those of a certain political orientation to an abused spouse. Perhaps this is why the call to unity and healing sounds a tad hollow just now?

I sure hope seminary students these days are required to read Friedman's Fables somewhere along the way in their vocational journey. Such an important book.

UPDATE: On a related note: If this is a new perspective for you, be patient, practice tolerance, don't dismiss prematurely, watch the whole thing. If this is a familiar perspective, listen double-speed, but note where Prager is coming down right now. I don't think (?) he is actually advocating formal secession, but he certainly advocates radical disengagement.

Prager is Jewish, and a very grateful and staunchly pro-American Jew at that, but he seems to be approaching a Calvinistic view of "total depravity." Were he a Christian and full-blown Calvinist, he might say, as Calvin did in his Sermons on the Ten Commandment, that divorcing your abusive spouse is permissible and even loving, because if your abusive spouse cannot control his or her anger, then you are putting the abusive spouse's (!) soul at risk of committing a mortal sin (murder) if you continually place your own life at risk at their potentially murderous hands. In other words, sometimes the best way to "love your enemies" is to separate from or "divorce" them.

There is some wisdom here that is well worth considering.

Posted by The Year D Project at 7:15 AM No comments:

Email ThisBlogThis!Share to TwitterShare to FacebookShare to Pinterest
Labels: prayer

We all know this law from the Old Testament is one on which Jesus raises the bar by telling his disciples they should turn the other cheek. But do you remember the origin of the law? The reason it was issued in the first place? It was the sentence to be passed on a false accuser. In Deuteronomy 19:16-21, we read ...

If a malicious witness comes forward to accuse someone of wrongdoing, then both parties to the dispute shall appear before the Lord, before the priests and the judges who are in office in those days, and the judges shall make a thorough inquiry. If the witness is a false witness, having testified falsely against another, then you shall do to the false witness just as the false witness had meant to do to the other. So you shall purge the evil from your midst. The rest shall hear and be afraid, and a crime such as this shall never again be committed among you. Show no pity: life for life, eye for eye, tooth for tooth, hand for hand, foot for foot.

Isn't that interesting. Clearly the aim is to stem false accusation, by punishing the first instance, so that it would not become a pattern, a habit, a modus operandi that people can practice with impunity, as they do today.

I wonder how soon we shall start to hear of someone — I won't say who — filing a raft of lawsuits for false accusation.

Posted by The Year D Project at 6:29 PM No comments:

Email ThisBlogThis!Share to TwitterShare to FacebookShare to Pinterest
Labels: eye for an eye, false accusation

Words of the day

I'm not a lawyer, but it seems to me that John Matze and Co. at Parler should introduce a new word to the cowardly new world of big censorship: Centillion. Or maybe just leap to: Googolplex. As in dollars. No, make that Bitcoins. No, there aren't that many of them. Oh well, whatever the currency, when it comes to the denomination, we might as well be poetic in matters of justice.

Posted by The Year D Project at 1:37 AM No comments:

Sundog on a Sunday dog walk

Charlemagne and I saw this sundog on our walk this morning, the first Sunday of the decade (2020 was the last year of the previous decade, properly speaking). I'm not given to superstition, but this was a glorious sight by which to greet the New Year, the new decade, and the Sunday nearest Epiphany. The still shots only capture the sun itself (left) and the right part of the halo. But once we got to the top of the hill and looked back, I was able to get the whole thing by panning on video. 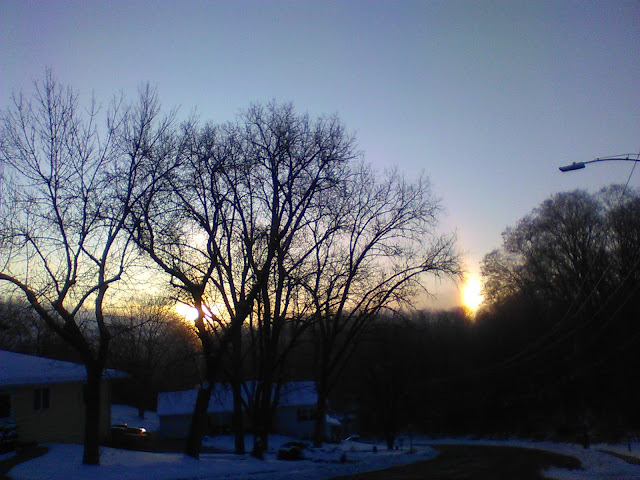 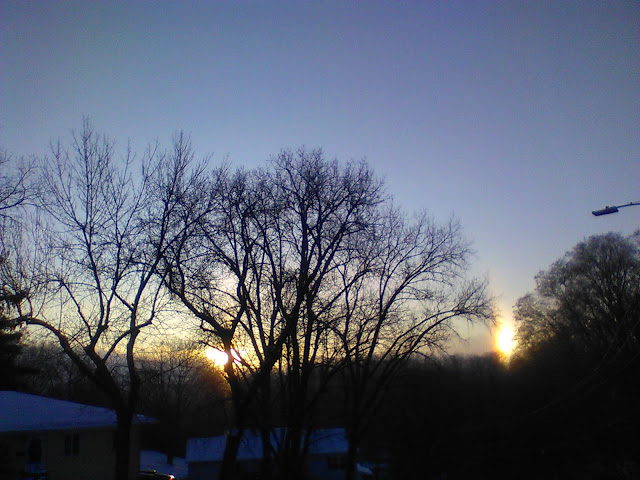 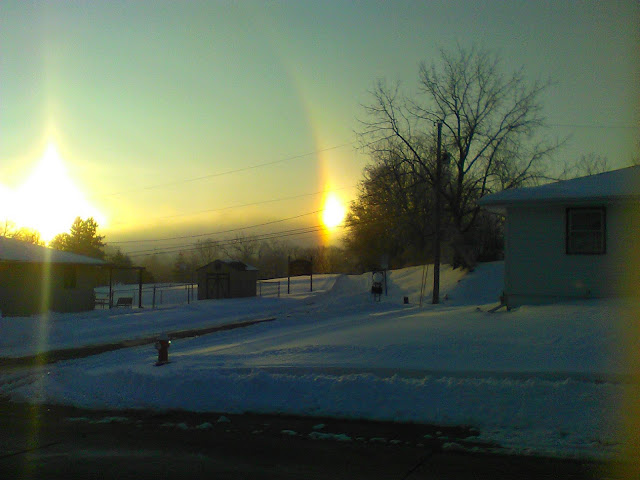 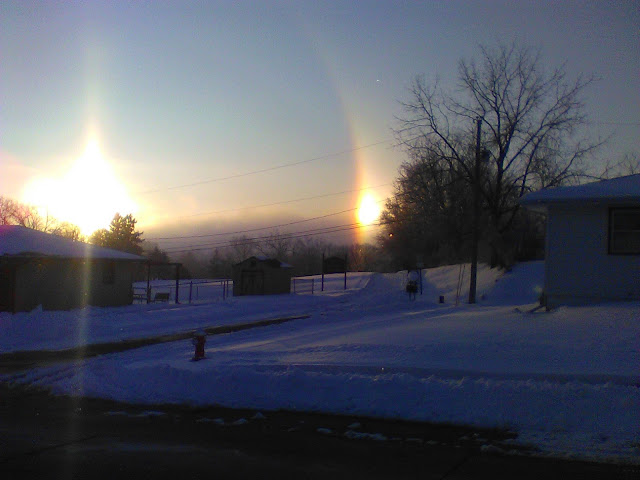 UPDATE(S): Here is the Wikipedia page on sundogs. There you will read that the Anabaptist Jakob Hutter interpreted the sight as a blessing, but others have taken it as ominous. Early classical sources referred to "mock" suns, but make sure to read the paragraph on the Swedish King Gustav Vasa who thought a painting of the sundog conveyed a conspiracy against him ("the sun") by two rivals ("fake suns"). [Yes, this Epiphany, January 6, should be veeerrrry interesting!] Lord, let thy will be done, for the glory of the Sun/Son of Righteousness.

"Hail the heav'n-born Prince of Peace!
Hail the Son of Righteousness!
Light and life to all he brings,
ris'n with healing in his wings!
Mild he lays his glory by,
Born that man no more may die,
Born to raise the sons of earth.
Born to give us second birth.
Hark! The herald angels sing,
'Glory to the newborn King!'"

And is that not simply the greatest verse in 2000 years of Christian hymnody?

Posted by The Year D Project at 7:33 PM No comments:

Email ThisBlogThis!Share to TwitterShare to FacebookShare to Pinterest
Labels: sundog

Just released a new instrumental CD called "Just," just before the turn of the year. 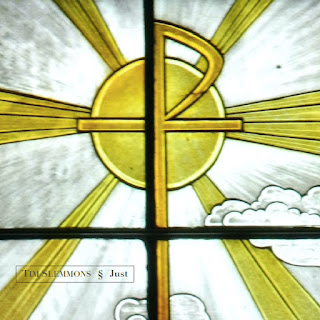 Here is a link to the whole catalog of seven records.
Posted by The Year D Project at 9:56 AM No comments:

I'm not sure when a president has voiced "what Christmas is all about" as clearly as this. Like him or not, whether you hate to see him go, think it is not over, or can't wait for the next one, don't miss the point. When Trump points to someone he knows is infinitely greater than himself, it is worthy of note.  Merry Christmas, everybody.